High resolution snow data collected from two small catchments in the southern Seward Peninsula was used to identify key factors that control snow distribution, quantify the relative impacts of those factors and improve the snow representation for the arct 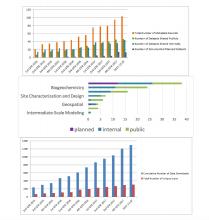 UAF researchers working on the NGEE Arctic project validated the GIPL model and simulated ground temperature dynamics for the entire Seward Peninsula according to the RCP4.5 climate scenario.

The effects of fine-scale topography can be represented in models with coarser spatial resolution through the use of a new subgrid model, thus enabling computationally demanding integrated surface/subsurface hydrology models to be used at field scales 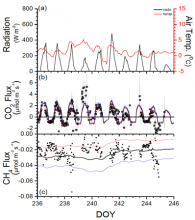 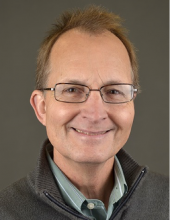 NGEE Arctic Scientist Writes about Career, Mentoring, and the Value of Good Colleagues

Raised amidst the cornfields and grasslands of Mid-America, this NGEE Arctic researcher has passion and curiosity for people and the plant sciences. 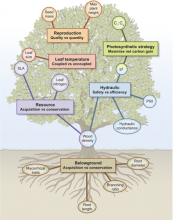 Scientists around the world are working to simplify the vast array of plant species and forms in order to distill general features of plant function, structure, and strategy.

Plant Traits Across an Arctic Landscape: Above versus Belowground

NGEE Arctic researchers are quantifying above and belowground variation in plant functional traits across environmental gradients to inform the representation of plant traits in terrestrial biosphere models.

A field research showed that evapotranspiration from mosses and open water was twice as high as that from lichens and bare ground, and that microtopographic variations in polygonal tundra explained most of this and other spatial variation 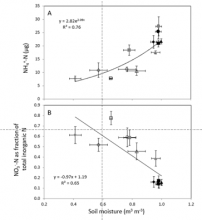